JP Reese’s Dead Letters (2013-ČERVENÁ BARVA PRESS) is a captivating and compelling chapbook of poems that will keep you coming back for more. Each of the twenty poems in this collection is an exploration of lyrical language, vivid imagery and human emotion. Reese’s dedication to the craft is evident in the way she deliberately uses form to serve function in order to create a sense of time and place and to convey the message in each individual poem. Each of the poems in Dead Letters flows effortlessly when read off the page and is spellbinding when read aloud. While the poems in Dead Letters are readily accessible, they are also subtly nuanced and have the kind of depth that reveals something new with each reading. This is a really fine short collection written by a fine poet. This chapbook is one well worth reading and adding to your library. You’ll find yourself going back to it again and again.

Robert Vaughan’s 2013 release, Microtones from Červená Barva Press contains two dozen prose poems of varying lengths and a variety of rhythms and structures. From the shortest, just four lines, to the longest, going on two pages; Vaughan’s poems are like songs with a hook that make you want to hear them again. Microtones is like a hand carved box filled with little treasures, a leather album with photographs of people and places you want to know more about, or a double record on vinyl with 24 three minute songs you play over and over.

From the opening piece, The Outlaw, right through to Wrestling With Genetics, the poem that closes the book, the arc and flow keeps the reader moving from one poem to the next. However, you can also pick any poem at random and it shines just as brightly on its own.

Vaughan’s writing is deep and nuanced and evokes both a visual and a visceral response. The poems flow with an ease and grace that is musical and lyrical, in language rich with unexpected images and surprising passages that stop you in your tracks and make you slow down, go back, and read them again.

“You hang mid-air, arms akimbo, glance askance. Resigned. Jubilant.
As we are when any end is imminent.”

Robert Vaughan is a keen and compassionate observer of humanity; his writing, at times, tender, poignant and sad, yet unsentimental and tough when it needs to be. There’s also a healthy dose of irony and humor and a playfulness with language that is unique and refreshing.

“He’s the tetherball attached to my pole, the flying trapeze of my soul.”

You slide into each poem with so much ease, that, before you know it, you’re off and running. Microtones celebrates the predicaments of the human condition and the ephemeral quality of human relationships, and mourns their passing, while at the same time, still holding hope for the future.

Though Microtones is work from a seasoned author, it is also fresh and exciting new work from a writer just really hitting his stride, an artist who speaks to us, in full, with a vibrant voice, and whom we can expect to hear from again. 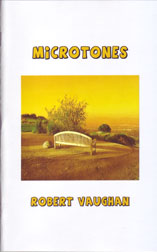